Your browser does not support the Unity Web Player. Want to save the game for later? Add it to a collection.

Support This Game
Here is a game where you make tea for two, one player is mute and the other blind...BEWARE! THIS UNITY BUILD IS SUPPOSED TO BE USED WITH A MAKEY MAKEY CONNECTED TO TWO BRACELETS CLOSING A CIRCUIT PRESSING THE SPACEBAR.

Gamemaster can add the unity based ambiant music system for more fun, it will play a funky music when players behave properly and an agressive soundtrack when they fail to collaborate...

The game master place the tea material on a table and explains to the players they will have to work together to prepare the best cup of tea to share, they can discuss for a minute what they want to achieve.

Player2 tie the wrists of the Player1 with a string or an elastic and then puts the blindfold of P1. P1 sits and P2 sits on him in front of the table, P1 then passes his arms around P2 allowing him to control them like the drawing above.

At this point the fun part is about to start... The gamemaster can move the material around the table or add water in different cups, teapots and jugs on the table, he can show it to P2.

The game master asks the players to start preparing the tea cup by moving water from a jug, to a teapot where the tea will infused and then in a cup (they cannot use they jug or cup as teapot!) :

P1 should remain completely silent while P2 must be guided by his words ex. take the pitcher; P2 can move one his hands and wrists, only P1 can control the rest of his movements.

Game Ends : when both players feel they have made a good tea and P1 taste the tea made by the team.

Let me know if you try the game! 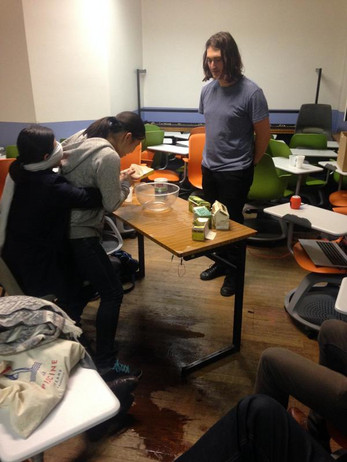 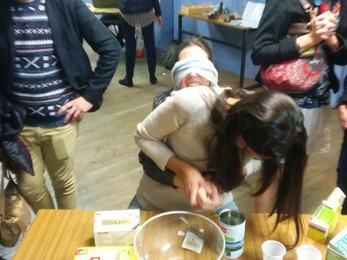